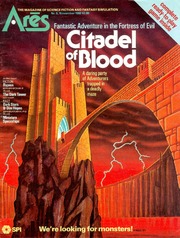 Starting in 2008, Dungeon and its more widely read sister publication, Dragon, went to an online-only format published. Both magazines went on hiatus at the end of 2013, with Dungeon Issue 221 being the last released. Contents • • • • • • • • • • • • History [ ] TSR [ ] Dungeon (initially titled Dungeon Adventures) first received mention in the editor's column of Dragon Issue 107 (March 1986). Lacking a title at that point, it was described as 'a new magazine filled entirely with modules' made available 'by subscription only' that would debut 'in the late summer or early fall' of 1986 and 'come out once every two months.'

The publication's original editor,, elaborated on this basic outline: Dungeon Adventures is a new periodical from TSR, Inc., in which you, the readers, may share your own adventures and scenarios from and gaming with the legions of other fantasy gamers. Each issue offers a number of fairly short (but often quite complicated and long-playing) modules, selected from the best we receive. What kind of adventures do you want to see? We're going to offer as broad a spectrum of material as possible:, wilderness camp-outs, modules, solo quests, tournament designs, scenarios, and more. The premiere issue of Dungeon: Adventures for TSR Role-Playing Games was undated, but 'November/December 1986' appears on the cover of the subsequent issue, and Moore stated that it had been released prior to the November issue of Dragon. The magazine's format consisted of 64 pages of short D&D and AD&D game adventures of various lengths, themes, and tones, written by both amateur and professional fantasy role-playing writers. In conjunction with the first anniversary of Dungeon Adventures, included a brief review in Issue 125 (September 1987) of Dragon.